It has been quite the week. Here are some of the reasons why:

First, we had our monthly Zone Meeting on Thursday. That’s more or less an all day event since it warrants a train ride to Alicante. It also rained on Thursday which is only the second time it’s rained during my three months in the field (every other day has just been sunny and clear with pleasant temperatures

). Then, after the Zone Meeting, Elder Catmull had to leave to go to Málaga until Saturday evening to renew his residency for Spain, leaving me with the other Elders in Elche for a couple of days. On Friday, we had our bi-transfer interviews with President Andersen, and then we had to go back to Alicante on Saturday and Sunday for stake conference. More or less, everything out of the ordinary that could happen in a transfer basically happened between Thursday and Sunday, and now it’s p-day again and It almost feels like these past few days have just kind of been a dream.

Even with all of that going on, we still managed to have a pretty solid week in terms of finding and teaching. Last Monday, one of the Hermanas here was telling me a story of how she and her companion were trying to get to the mall and how things kept delaying them, causing them to arrive much later than originally planned. But, when they arrived to the mall, they encountered a potential investigator who they had contacted on the street a few days before and were able to set up a lesson with her. While she was sharing this with me, I couldn’t help but think in my head that those experiences, those “mini miracles,” if you will, seem to never happen to me.

Once P-Day ended and we began proselyting again that night, Elder Catmull and I had a cita set up with a menos activa from the ward. When we arrived at her building and rang her bell, she didn’t answer. So, we called her, and luckily, she was only running late; we had a lot of citas cancel on us during the past couple of days, so I was initially afraid that it was happening again. Luckily not though. She told us to return in half an hour, so we were going to quickly stop and say hi to a different menos activa during that time.

We were walking down the street to her piso, and seemingly out of nowhere comes up to us a man holding a Book of Mormon in his hands. His clothes were a bit tattered, his hair somewhat unkempt, but any preconception of craziness or homelessness I had initially felt about him left my mind when he started talking about the stories and the prophets in the Book and how he had faith they were true. We ended up having two lessons with Him in the days after, and he had quite the wealth of knowledge and faith in the Book of Mormon, telling us things that I hadn’t even learned until my religion classes at BYU. Sadly, he lives in the north of Spain and was only in Elche for the week,  but this experience was such a manifestation to me that miracles happen every day. God has his timing for everything. Although sometimes it feels like we go out and work all day to no avail, I know that as long as we try our best, the difference will be made up. I know that if we have faith and if we demonstrate it through diligent work, people will be placed in our paths for us to find and teach.

Always have faith. Always believe, and “Even if ye can no more than desire to believe, let this desire work in you, even until ye believe in a manner that ye can give place for a portion of my words” (Alma 32:27).

I hope all of you have a tremendous week. 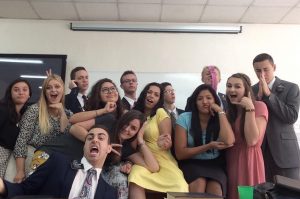 3: Picture of the “real” Zone of Alicante from the Zone Meeting

5: This picture is from the Zone Conference last month with Elder W. Craig Zwick of the 70, but I just got these pictures now, so here they are.

6: Myself with Elder Hollowell, one of the other two Elders who arrived to the mission at the same time as me.